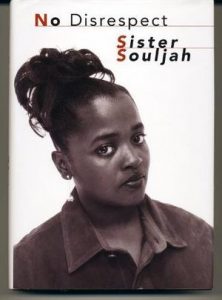 American author, activist, recording artist, and film producer Lisa Williamson aka Sister Souljah. Most known for her autobiography “No Disrespect” in 1994. She narrates life from poverty to becoming one of the most prolific writers in American Literature. Listed three times in the top ten chart of the New York Times bestselling author. Traveled the world using her passionate and articulate voice to educate teens about womanhood and manhood living Black in American. The author of 5 national bestsellers and featured speaker at the Million Woman March.

However, Sister Souljah’s journey wasn’t easy. Born Lisa Williamson on January 1964 in Bronx, NY. Her mother raised Lisa along with her siblings. They lived in a government subsidized housing below the poverty line until the age of 10. The Family then moved to Englewood, New Jersey. Manifested in African history at a young age, Souljah became an intern in the House of Representatives for the Republican Party durning high school. Later, She majored in American History and African studies at Rutgers University, where she was a well-known writer and political commentator for  Rutgers’s newspaper. As a Young Woman she spent many years traveling to many parts of the world. Most notable her work with the international student anti apartheid movement in South Africa. Accomplishing the denial of major corporations doing business with apartheid South Africa. Also, opened the African Youth Survival Program, for homeless children in North Carolina.

“The Hate that Hate Produced”

Sister Souljah as a hip-hop artist incorporated her views of black injustices in her music. In 1992, Williamson’s career began as a member of the hip-hop group, Public Enemy. Her solo album, 360 Degrees of Power, debuted later in March on Epic Records. Her video, “Final Solution: Slavery’s Back in Effect,” brought her national attention. In her songs and writing, she reflects how the effects of slavery still plague the African-American.

Controversy spew in a Washington Post interview published on May 13, 1992. Souljah responding to a question regarding injustice violence in 1992 Los Angeles Riots. Question: Even the people themselves who were perpetrating that violence, did they think that was wise? Was that a wise reasoned action?
Souljah: Yeah, it was wise. I mean, if black people kill black people every day, why not have a week and kill white people?… White people, this government and that mayor were well aware of the fact that black people were dying every day in Los Angeles under gang violence. So if you’re a gang member and you would normally be killing somebody, why not kill a white person? Do you think that somebody thinks that white people are better, are above and beyond dying, when they would kill their own kind?— Quoted in David Mills (June 16, 1992) “In Her Own Disputed Words; Transcript of Interview That Spawned Souljah’s Story”, The Washington Post Sister.

Lisa Williamson will be remember as full time author, wife, mother and Lifetime Activist. She has penned The Coldest Winter Ever (fiction), which has sold two million copies to date, and Midnight, A Gangster Love Story (fiction), Midnight and The Meaning Of Love, (fiction), A Deeper Love Inside; The Porsche Santiaga Story (fiction) and NO DISRESPECT, (non fiction), all best sellers. Sister Souljah remarks on what a Souljah Moment is“That’s when you meet a beautiful, powerful woman – and you just can’t forget her.