It was just the D.J. playing music for the neighborhood. These parties were affectionately known as block parties, or more commonly “the jam”. This could have been any urban city in America in the early 1970s but in New York the D.J’s were not only playing the popular music of the day, they were broadcasting the more obscure cuts from popular albums that the radio wouldn’t dare touch, and the more daring D.J.s were playing unknown music by unknown groups altogether.

A microphone was always present at parties for announcements and such, and as a result the D.J. was the original M.C. (master of ceremonies). Whether he or she was simply making an announcement, telling Jimmy to move his car or asking the party people how they felt, the D.J. was the host.

A young D.J. named Joseph Saddler code name Grandmaster Flash was a student at Samuel Gompers Technical school in the Bronx. Flash was intrigued by the concept of extending instrumental parts of records, but Flash was literally a scientist. Grandmaster Flash would drag electronic parts from junk yards and build speakers, modify echo machines and mixers and repair his already existing equipment. Flash saw what Herc was doing with 2 copies of a record and 2 turntables, but he felt that Herc lacked precise timing that left the dance floor in disarray.

Flash was devoted to improving on what Herc was doing, and he actually developed techniques like the clock theory to perfect what he felt Herc lacked. Flash also built his own cue switch and glued it onto his mixer so that he could hear the next record in his headphones before he debuted it to the public. Flash greatly improved upon what Herc was doing at his parties, and he amassed a huge following in New York, specifically the Bronx. Along with his assistants, The Disco Bee and EZ Mike The Grandmaster Flash show was something to behold according to those who witnessed it firsthand.

Brothers Melvin and Nataniel Glover, inspired by the poetry of their older sister Linda and Herc’s  M.C.’s Coke La Rock and Timmy Tim started to experiment with a back & forth style where they split words and phrases between each other. Melvin and Nathaniel would later become Mele Mel and Kidd Creole, and after perfecting their routines, the Glover Brothers began to hop on the mic at the parties of Bronx D.J.’s who had sound systems and gave parties. It was inevitable that Mel & Creole would cross paths with Flash & Cowboy, and when they did one of the first and most influential rap groups was formed –

The difference in the 3 M.C.’s and others who rhymed at the time was a matter of style. The “Jive Talking” D.J.’s like Hank Span and Jocko didn’t rhyme on the beat, or as the great D.J. Hollywood describes it “in syncopation”. The MC’s/D.J.’s like Coke La Rock and Timmy Tim were not saying full rhymes, they were saying phrases and fragments and they weren’t on the beat. They were rudimentary like nursery rhymes. The 3 M.C’s were saying full rhymes in syncopation. Kidd Creole says that the first person that he ever heard say a full rhyme about themselves in syncopation was his brother Mel. Scorpio said to me confidently “if it’s one thing that we own the patent on, it’s saying full rhymes on beat”.

Eddie Morris aka Mr. Ness was best friends with Mele Mel, in fact they were in a break dancing crew together and they once danced against Mean Gene (Grandwizzard Theodore’s older brother) and Grandmaster Flash. Eddie (who eventually changed his name to Scorpio because he was getting so many girls that he called himself a stinger) was always in the company of Grandmaster Flash & The 3 Mc’s and he eventually became an M.C. himself and joined the group forcing a name change to the Furious 4.

Guy Todd Williams was an M.C. with a Bronx crew called The Funky 4.  As a singer Guy was mentored by Rahiem Leblanc of the R&B group G.Q.. Rahiem Leblanc was such an influence on Guy, that he changed his stage name to Rahiem as well. On May 11, 1979 The Funky 4 battled Grandmaster Flash & The Furious 4 at the Webster Avenue P.A.L.. That night Rahiem left the Funky 4 and joined the Furious 4 giving birth to, 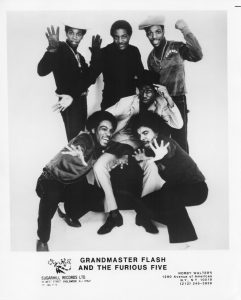 The influence of Grandmaster Flash & The Furious 5 is undeniable, especially amongst their contemporaries. They were the only group from the era before rap records to be able to take their D.J. on tour after signing a record contract. Flash was that important to the group and their live show. Sugar Hill records vocal coach, percussionist and vocalist Craig Derry says “Flash literally set the template for the D.J. to play arenas. I watched him explain to the sound men that they needed a quarter inch plug to connect his turntables to the arena’s sound system. Now its standard for D.J.’s to play arenas as an act. No one did it before Flash”. Cowboys call & response, Mele’s social commentary and use of metaphor, Creole’s mastery of the echo chamber and “yes yes y’all” segues, Scorpio’s flamboyance and futuristic style of dress and swagger before it was a word in Hip Hop, and Rahiem’s unique cadence and singing abilities (he sang 2 ballads on The Message album) made this group an unstoppable force. The Library of Congress archives, Grammy Hall of Fame, Rock & Roll Hall of Fame (first rap act ever inducted) and now the Grammy Lifetime Achievement Award. You have to see to believe. I saw and I bear witness. Congratulations Gentlemen.

JayQuan is a music historian with an emphasis on Hip Hop, lecturer, narrator, webmaster, avid record collector, and music lover. Since 2000, he has been writing about Hip-Hop in general, the art of Emceeing and the evolution of rap records. ​ Jay is the founder and operator of The Foundation (foundationhiphop.com), a website that contains in-depth interviews with the founders of Hip Hop, biographies and profiles on the legendary rap groups, as well as a detailed timeline which chronicles the history of rap records. JayQuan produces, narrates and edits an acclaimed series of what he describes as “infomentaries” called The Lessons on his YouTube channel. The Lessons are best defined as video cliff notes about the legendary pioneers of the rap genre. ​ In 2018 Jay decided to expand his infomentaries into full length, broadcast quality pieces. He is currently working on several documentaries, as well as authoring his first book: The Evolution and De evolution of Rap Music. JayQuan serves as The Minister of Information for Grandmaster Flash & The Furious 5 and he is the official historian for the Hip-Hop Museum in D.C., as well as a member of the curatorial board for the Universal Hip-Hop Museum in The Bronx. ​ Additionally, Jay is well-versed in the histories of Progressive Jazz, Soul/R&B, and Funk. He has conducted extensive interviews with Jazz legends Lonnie Liston Smith and Tom Browne; as well as Funk/Soul pioneers Parliament Funkadelic, Cameo, Steve Arrington and Switch. JayQuan is available for lectures, voice overs, and interviews concerning all things related to Hip Hop, specifically from a historical view. Jay resides in Richmond, VA.